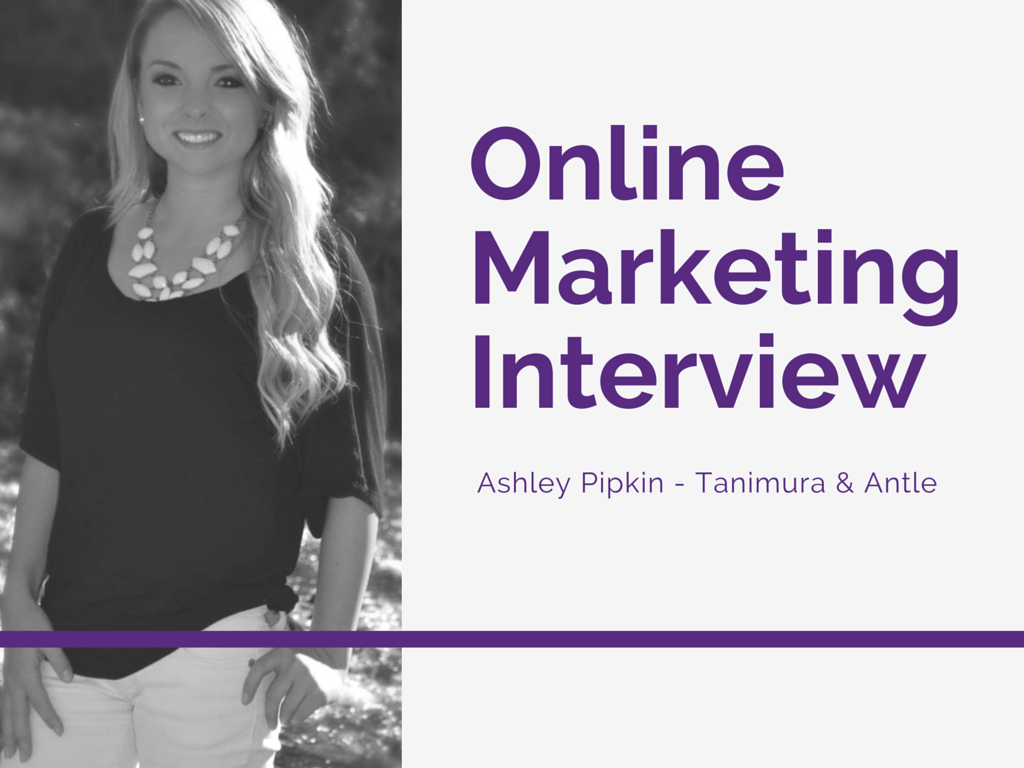 I grew up on Rolling Stone Magazine and other music periodicals where, as a hard-rock playing teen, I would open the pages to see interviews of my favorite rock stars presented in a back-and-forth format of Q&A between the author and the interviewee. This was a time before podcasts and before live videos. The format of the resulting article always seemed authentic, real, and educational.

I recently chatted with Ashley Pipkin (AP), sales and marketing manager at Tanimura and Antle (T&A) Produce, about how she maintains such high consumer engagement on the company’s social media profiles, how she created an atmosphere of team sharing, and her philosophies of paid advertising. 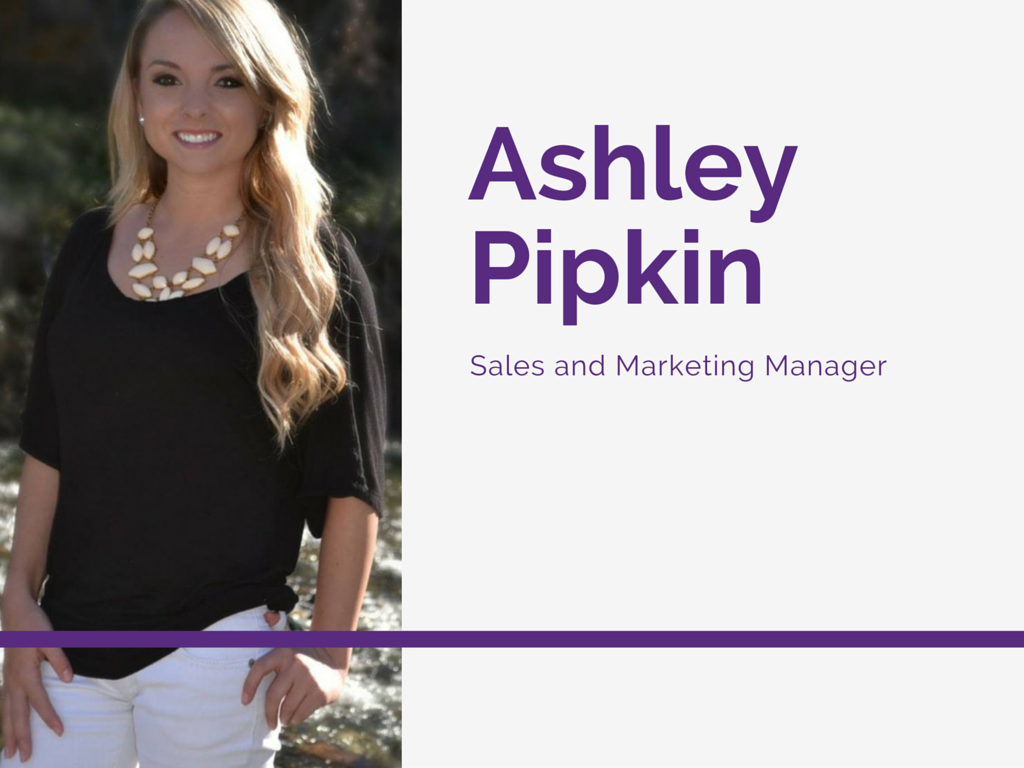 Ashley is an up-and-coming rock star in the agricultural industry, so I’m taking a little inspiration from my rock musician days and presenting our phone conversation in a similar Q&A fashion.

Founded in 1982, T&A Produce is located in Salinas, California. During the gentle summers, the production takes place in California. During winter, the company moves to Yuma, AZ to take advantage of the Arizona sun. They grow a myriad of lettuce varieties, broccoli, onions, cauliflower, and more. The company’s social media presence continues to grow with over 17,000 Facebook fans. 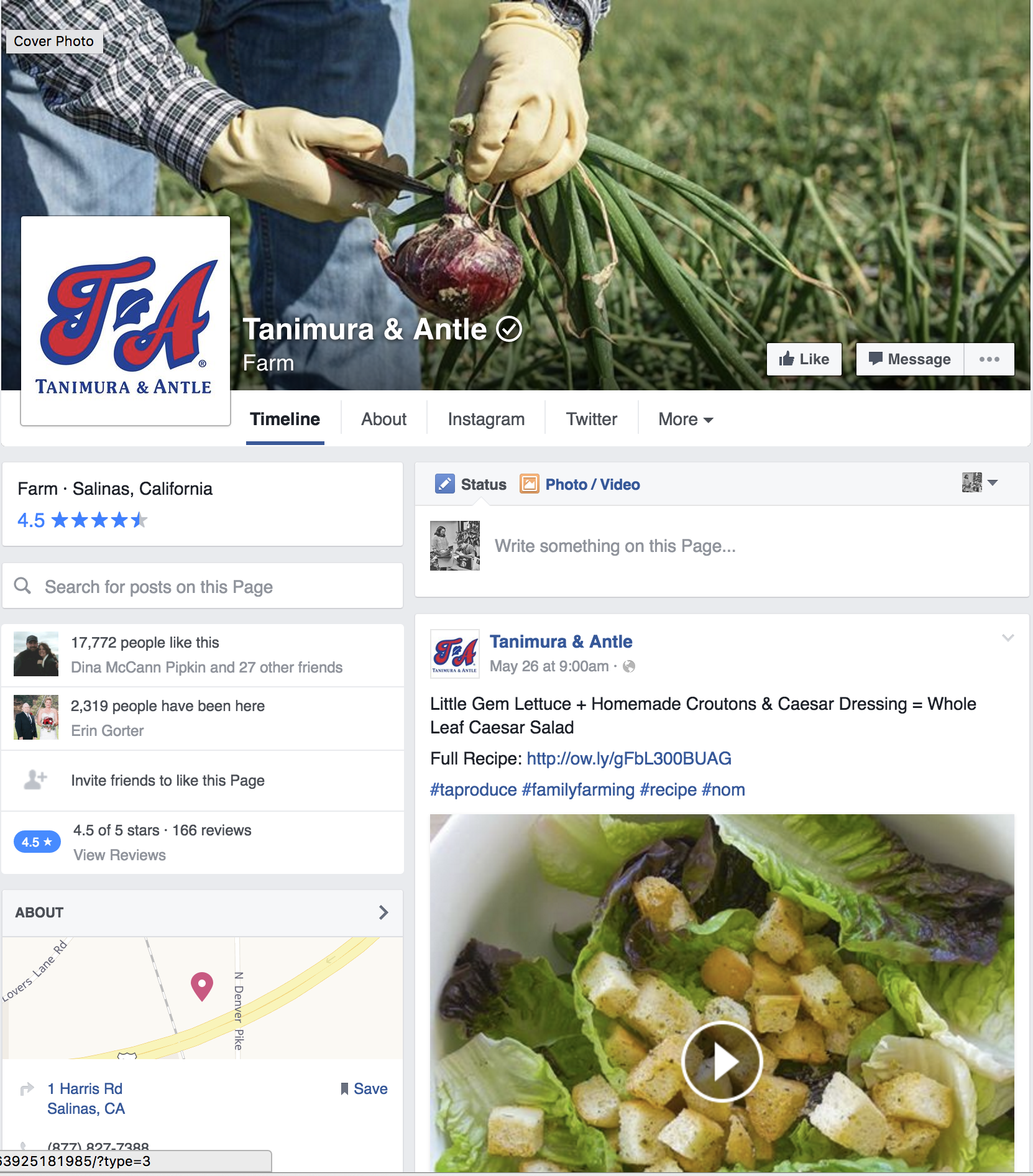 Building Engagement, Promoting Unicorns, and the Importance of Collaboration

AP: It’s continually evolving, but right now I work in marketing. I wear a few different hats. I manage all our social media, that’s a biggie, and the consumer response.  We have more and more consumers contacting us on Facebook. I also talk to [customers] on the phone and through email. I also help with consumer events and trade shows.

SS: One thing I noticed on your Facebook page is how well you convey a brand story that it resonates with your customers. Tell me about how you created this culture.

AP: I’ve always been really passionate about educating the public about agriculture…I noticed at farmer’s markets that people wanted to talk to farmers about where their food is coming from. They wanted to know what it takes to get [food] to the farmer’s market. I just applied that same concept to the grocery store. If people are going to go to the farmer’s market, they’re probably buying produce from the same farmer that sends it to the grocery store. We could share that same story online with people from anywhere in the world. It’s taken off from there.

SS: What social media are you on?

SS: We get asked all the time, “Should I be on X platform?” How did you make the decision to run with these programs?

AP: I went to a social media conference a year ago, and their main thing was that you don’t want a customer talking about you or looking for you and not having a presence there. We may not be as active on Twitter as we are on Facebook, but if someone tweets at us that they found a bug in their lettuce and they’re upset about it, we want to be able to have that conversation with them instead of just letting it slide by.

SS: You mentioned Snapchat and other forms of social media. How do you decide what to put your effort into and what to ignore?

AP: You have to stay up with the times and pay attention to what people are using. We try to go to social media conferences a few times a year to stay in the loop on what’s popular and how we can reach more people.

SS: What I notice about your page is the level of engagement. What’s your secret to posting interesting stuff that gets such a great reaction from your audience?

AP: Honestly, I think we try to be completely transparent. Anyone in the company can send me a picture. We’ll post it and share it. People don’t see [acres of lettuce] every day. It just gives them a window into where their food comes from. People find that interesting. As far as the engagement, we try to let posts live out their organic engagement and then we’ll boost them for like $5 a day to get it like one-third more engagement.

SS: How do you decide which ones to boost?

AP: One of the things I learned at a conference was to only boost your unicorn posts. Only boost the ones that are doing well. We’ve tried to follow that.

AP: The best engaging posts. Most of them are either about our employees or about field pictures. There’s nothing special about them, people just like seeing where their food comes from.

SS: How do you decide on the timing of these boosted unicorn posts?

AP: I think that if you post something and then 5 minutes later you start paying for it, you start shooting yourself in the foot. People will engage with it without paying for it. If you’ve built a loyal following, they’re following because of what you post. Once [the engagement] starts dying off, that’s when you start to pick it up again through a boost.

SS: Tell me about the audiences that you boost to.

AP: We have a few different audiences set up. The one we usually boost it to is called general audience. It’s people in the U.S. ages 18-65. It depends. Sometimes when we share a blog post, if it relates to FFA students, we’ll have certain audiences set up for different types of posts. We ship nationwide and to all sorts of grocery stores and restaurants, so we keep it pretty broad.

AP: We’ve started making videos from “seed to shelf” and it shows them from planting to the truck leaving the field. Those have really taken off this month. We’ll let them reach out on their organic reach and then boost it from there. We made a post about summarizing how much our harvest employees make and what they get for being part of our company. People don’t know. They might have misconceptions about these things. We try to educate them and those do very well.

AP: I lean on it a lot. It can be challenging when [production moves] down to Yuma since I’m not seeing people every day. When we’re in Salinas, them sending stuff to me is a lot easier. It started with Brian Antle, who ran our Instagram. As soon as I took it over, he’d send me stuff to make sure the voice was the same. I’d post it for him. Slowly people caught on to that and started sending me stuff.

We’ve recently hired some younger people. I’ll ask them for specific pictures. After that they’d just start sending me stuff. I have co-workers on Facebook, and they’ll post images on their accounts and I’ll ask if I can post that on the company page. Now people think of me when they’re taking pictures out and about.

SS: How much does that help to have everyone thinking of you and sending you content that you just need to select?

SS: Everything I’m reading is saying Facebook Messenger is trying to be the new 1-800 number, where they’re encouraging customers to contact pages on Facebook instead of the phone. Consumers want immediate response. How are you using messenger to engage with customers, but not let it control your life?

AP: One interesting thing we’ve been doing is [using Facebook to post employment announcements]. Last year, for the first time ever, we didn’t have a wait list for employees to come work with us for harvest. We walked by a lot of product last year because we didn’t have enough people to physically cut product. We started brainstorming different ways to recruit people.

We’ve made Facebook ads that target the demographics that would be interested in harvest positions. Honestly, the bulk of our messages are from people who want to come work for us. We manage those messages differently than consumer messages. Facebook can let you make labels for messenger, so we’ll apply a label to these messages and depending on what the subject is, someone from HR will talk to all these potential people.

SS: Any advice to people just starting out or looking to get more serious with their Facebook marketing?

AP: When you don’t have a huge following you can test out what works and what doesn’t. If no one likes your post, it’s ok. You can test things out, and it’s not going to be a huge deal.

[Most importantly], be consistent. Post once a week, that’s fine. Next week, don’t post five times a day. Be consistent and grow a following that appreciates what you post and how you post it.

Perhaps the most important take away that I got with my phone call with Ashley was the necessity of a collaborative spirit. Ashley has a ton of different responsibilities, a reality that probably hits home for you as well. A spirit of collaboration helps optimize her efficiency in finding content to post on social media. Additionally, the people sending her pictures or videos are in the field at times when she isn’t. Talk to your staff members, employees, co-workers, and even your customers. Get them to start sending you images or videos that you can collect in a folder and use at a later time. Work smarter, not harder.

Secondly, I think it would be wise to revisit her advice on boosting unicorn posts only after the organic reach and engagement has dropped. Facebook is quick to identify engaging posts that should be boosted. However, boosting a post on Facebook’s schedule may cause you to pay to reach people who would have been reached organically. Monitor your posts, identify the unicorns, understand when reach is dropping, and then boost appropriately.

← Social Media Polls – So Easy an Ape Can Do It? Targeting the Millennials, By a Millennial →
Loading Comments...