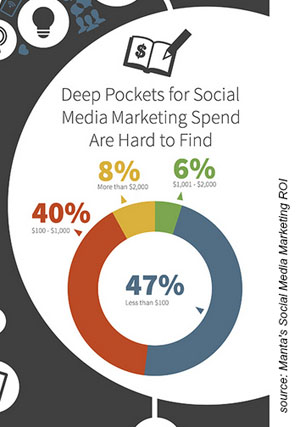 Are you using Facebook to acquire customers for your small business?

Do you struggle to measure the return on your social media marketing investment?

Despite a lack of concrete proof of sales, small businesses are devoting time and dollars to Facebook marketing.

In this article you’ll discover findings from recent studies focused on Facebook marketing.

#1: Most Small Businesses Don’t See a Return From Their Social Media Efforts

In April 2015, small business directory Manta surveyed 540 small business owners for their insights on social media return on investment (ROI). Fifty-nine percent report that they did not see ROI from their social media activities. Because the vast majority of small businesses puts most, if not the entire, social media budget into Facebook, this article focuses on that channel.

Social Media Examiner’s 2015 Social Media Marketing Industry Report findings echo those in the Manta study. When the team asked 3,720 marketers whether their Facebook marketing is effective (which we can interpret as driving return to some extent), only 45% reported that it is. (Read here about how 60% of the respondents for the report were small business owners or executives. They either worked in companies with 2 to 10 employees or self-identified as solopreneurs.)

The report also reveals that just 33% of the self-employed described Facebook marketing efforts as effective. Larger businesses have a slightly higher regard for their Facebook marketing efforts, with 50% pleased with their Facebook returns. B2C marketers also have a more positive take than B2B, with 51% of B2C marketers finding Facebook effective, compared to just 36% of B2B respondents.

Overall, 45% of marketers agree or strongly agree that their Facebook efforts are working.

Gathering data requires that either the business owner or staff member learns or understands Google Analytics and Facebook Insights. Both of these tools require time and effort.

Further, as Facebook’s former Global Head of SMB Marketing Chris Luo explains in his March 2015 Fast Company article, effective Facebook advertising is moving away from the simple updates and boosting that small businesses could master easily:

“Facebook has also introduced new, more sophisticated, advertising tools to directly target any user on Facebook in their newsfeed, but for the most part, these tools are used by savvy direct marketers at mid-sized or larger companies and not small businesses.”

#2: Small Businesses Are Reluctant to Invest Money in Social Media

Small business owners are indicating their suspicion of social media marketing with their dollars. The Manta study mentioned above found that 47% of respondents invest less than $100 per month, and 40% spend between $100 and $1,000 monthly.

Most small businesses spend less than $100 on social media marketing each month.

Low spending numbers like these are surprising, given the hype Facebook marketing receives in the media. In a seeming contradiction, a recent poll of 547 small- and medium-sized business owners conducted by BIA/Kelsey and reported in The Wall Street Journal claims that social media marketing gets the majority of small businesses’ ad budgets at 21.4% of total dollars. Further investigation, however, reveals that small businesses don’t spend very much on marketing at all.

Key Takeaway: Spending $100 monthly or $25 per week on Facebook ads and boosting doesn’t get small businesses very far. Some marketing experts speculate thatsmall businesses are still testing Facebook and are therefore not willing to commit more money to the channel.

While the data above indicates that the majority of businesses don’t see a return on investment from Facebook, digging deeper reveals that most just don’t know whether they’re getting new leads and sales through the channel.

Social Media Examiner’s 2015 Social Media Marketing Industry Report shares that, of the 3,720 respondents (the majority of which are small businesses), only 42% stated they are able to measure the ROI of their social activities. Again, given that Facebook dominates small business social media marketing by a long shot, we assume that about this same percentage cannot measure the ROI of their Facebook efforts and expenditure.

The majority of businesses aren’t confident about their ability to measure their Facebook ROI.

Despite the fact that the majority cannot measure social media ROI, this number has been dropping over the years. In 2013, just 26% felt confident about calculating Facebook return. By 2014, the number had risen to 37%. Perhaps the 2016 Social Media Marketing Industry Report will reflect as robust a leap, with more than half of respondents claiming they’re measuring ROI just fine!

While there haven’t been many studies on small businesses measuring social media ROI, in general, marketers from companies of all sizes struggle with how to know whether a Facebook post contributed to a sale or an email conversion.

According to a Duke University study reported in The Wall Street Journal, only 15% of the 350 top marketers in the study could show the impact of social media on their businesses using quantitative approaches, and 40% could demonstrate it qualitatively. Nearly half of marketers said they haven’t been able to demonstrate the impact of social media spending on their business at all.

By 2014, the number of these confident responses had slipped 11 points to 29%. It’s possible that business owners and marketers are just now realizing the complexities of digital marketing and becoming suspicious of the “3 Easy Ways to Get Thousands of Facebook Likes”–style hype around social media.

Key Takeaway: Marketers at large corporations are struggling with how to measure social marketing ROI as well. While software companies are hard at work on social media attribution tools, nothing bug-free exists yet to clearly connect a like and a sale. Still, if small businesses can keep a Facebook presence current at a low cost, testing by “dipping a toe in the water” will be the preferred mode until that fails to work due to lack of commitment.

Even without solid numbers proving Facebook posts and ads lead to sales, most small businesses will be increasing employee time devoted to Facebook for marketing.

The Manta study, too, shows that more than a third of respondents increased employee time spent on social marketing from 2013 to 2014. Going forward, the 2015 Social Media Marketing Industry Report showed that 53% of marketers planned to increase their use of Facebook ads in 2015. CMO Survey expects social media marketing budgets to more than double from 9.1% of the overall marketing budget now to 21% in 2019. Is this increase justified?

Small businesses must work to simply get a sense of whether their posts and ads are bringing in customers and sales. If they don’t use Facebook Insights or Google Analytics, owners and marketers will never have more than a vague idea of whether Facebook works.

To get started measuring Facebook ROI, check out these two articles:

This article was first published on Social Media Examiner and can be found HERE.

← Marketing to Millennials Using Dialogue, Not Monologue How to Plan a Collaborative Marketing Event →